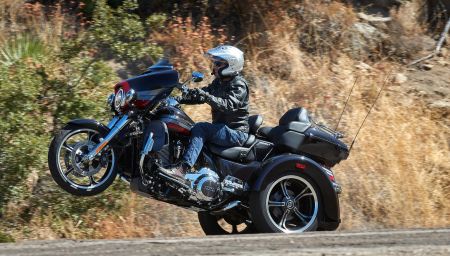 You know who does dig Harley’s trikes? Females! Can we all get an amen for more women on motorcycles, no matter how many wheels they have?

The stability offered by three contact patches also appeals to riders who lack confidence in their ability to hold up a big motorcycle, a challenge made even more difficult when loaded two-up. Imagine getting older but still wanting to ride. Among H-D owners, trike customers have the oldest average age. Amputees are another trike constituency.

Other people who covet H-D’s trikes are the bros and babes who like to ride — a lot. Harley tells us its trike customers log more miles than riders of any other model in the MoCo’s lineup. We all prefer riders to posers, don’t we?

Steamrolling down the road, it's easy to see why Tri Glide owners ride more miles than owners of other Harleys. Harley-Davidson photo.

The Harley-Davidson trike story begins in 1932 with the Servi-Car model, which remained in production until 1973. The latest H-D trike chapter was inaugurated with the introduction of the Tri Glide Ultra Classic in 2009. Although having a partial lineage to Lehman Trikes, Harley’s Tri Glide was based on a chassis designed specifically for a three-wheeled application.

“Our goal was to bring original-equipment design, quality and service to the three-wheel motorcycle segment with full-fledged factory benefits,” a Harley rep related.

H-D’s trike line was expanded for the 2015 model year with the introduction of a more minimalist offering, the Freewheeler. 2020 Freewheelers have a starting MSRP of $27,999.

All of which brings us to the vehicle on this page, the fanciest trike in Harley-Davidson’s lengthy history and the first to receive the full slathering of premium finishes and paint upgrades that are served up by H-D’s Custom Vehicle Operations, the sub-brand for limited-production “super premium” motorcycles.

The CVO Tri Glide starts at $48,999. Those who may be skeptical that anyone would want a trike priced at nearly $50k should know that the Tri Glide was the most requested model in the history of CVO. So don’t bother telling us that your SV650 offers a better value — you’re not the intended customer.

The CVO Tri Glide in Blizzard White. Harley-Davidson has special production lines for its CVO models and these bikes get the most complex and unique paint jobs coming out of the factory, in addition to the other added features. Harley-Davidson photo.

Apparently I'm not the intended customer, either, because this was the first time I’ve ridden a “proper” motorcycle trike, i.e. with a single front wheel. Despite having ridden several reverse trikes (Can-Am Spyders, Campagna T-Rexs, Piaggio MP3s, etc.) and 1,000 motorbikes, I’d never before sampled one of these trikes.

Despite the accessible 25.9-inch seat height, piloting a motortrike is initially unnerving. Countersteering doesn’t exist on a non-tilting trike, so reactions from the handlebar are decidedly different. When pulling away from a stop, a rider must remember that the rear wheels are a couple of feet outboard of the front wheel to avoid running over traffic cones, small children or his or her own feet.

Working in the Tri Glide’s favor is a Twin-Cooled Milwaukee-Eight engine, upgraded to CVO status in this stellar 117-cubic-inch version. Clutch pull is remarkably light for a 1,923 cc powerplant, and its precise actuation and the 117’s easy torque make take-offs surprisingly easy. Peak twist is said to arrive at 3,500 rpm with 125 foot-pounds of torque, claimed at its crankshaft, which readily pulls the trike’s considerable weight, as you can see in the top photo, where I am gently pulling away from a stop after manually defeating the traction-control system. Exhaust tips can serve as wheelie bars when you getting a little past that stupid.

The CVO Tri Glide gets Harley's "Kahuna Collection" hand grips. Heated grips are adjusted by the knob on the end. Harley-Davidson photo.

Maneuvering through city traffic is completely intuitive to anyone who has ridden a motorcycle and driven a vehicle with two rear wheels. Steering effort is pleasingly moderate at urban velocities, despite the standard-equipment steering damper. However, the effort needed to steer increases with velocity on a seemingly exponential scale. Without the ability to lean into turns like a motorcycle, the Tri Glide’s steering requires a forceful shove and pull of the handlebar to navigate higher speed corners.

The faster the curve, the more effort it takes to steer the Tri Glide. Harley-Davidson photo.

The muscle required to carve corners is the biggest negative of the trike experience. Bending it into freeway-speed corners probably takes something on the order of 10 times the amount of force that a single-track Harley does. Some customers have asked H-D for power-assist steering of some sort, but that is a difficult solution to engineer with the motorcycle front-end and fork arrangement.

On the other hand, cruising down a moderately straight highway is regal on the CVO Tri Glide. Suspension quality from the dual-bending-valve Showa fork and preload-adjustable emulsion shocks is quite good. The Tri Glide uses a solid-axle rear end (suspension revised in 2017) with a differential to eliminate tire scrub when cornering.

A drawback to any trike arrangement is that bumps in the road have the potential to affect three separate tire tracks — that’s even one more than a car.

In a touring role, the CVO Tri Glide is opulent. A rider’s butt is coddled by that cushy seat, which can be heated if one chooses, as well as the pillion saddle and the handlebar grips. Lighted switchgear lead you to ancillary controls like cruise control, while the “Boom! Box” GTS infotainment system sits up front below the low-profile windshield in a vibrant TFT touchscreen that can be operated while wearing gloves. The premium audio system is powered by a four-channel, 300-watt RMS amplifier through four two-way speakers located in the fairing and Tour-Pak luggage carrier.

Speaking of luggage, there’s plenty of space for it. Between the rear wheels sits a trunk that will make you the envy of the campground when it’s filled with a cooler of frosty beverages. It can hold up to 50 pounds in its 4.4 cubic feet. The Tour-Pak top-box astern the rear seat can stow another 2.4 cubic feet. Both feature internal lighting and remote locking. If you need to carry more junk than fits in its trunk, it can be lashed to the rhythmically named Tour-Pak carrier rack.

The MoCo isn’t famous for high technology, but there’s a fair bit of it on this Tri Glide. In addition to the excellent infotainment and the RDRS safety package, the CVO-TG features a Daymaker Adaptive LED headlight that can illuminate its way through corners. Another tech feature is H-D Connect, which is a subscription-based service that can deliver info like ride stats, fuel range, battery status, tire pressures, and even bike tampering alerts and a stolen vehicle tracking mode to your phone.

What did we learn about life on three wheels?

Riding a traditional trike arrangement is a bizarre experience for a vet motorcycle rider. The tripodal stability can be a game-changer for some riders, and the Tri Glide (starting at $34,999) supplies the street cred to fit in with their star-spangled brethren without sideways glances.

A reverse trike like a Can-Am Spyder is a dynamically superior three-wheeler and can be outfitted with a phalanx of touring accouterments, but its modern-facing design can’t appeal to traditionalists like a good ol’ V-twin from Milwaukee.

H-D claims the CVO Tri Glide is the ultimate touring trike. In terms of three-wheelers with just a single wheel up front, and that’s a difficult claim to argue.

Back to previous page