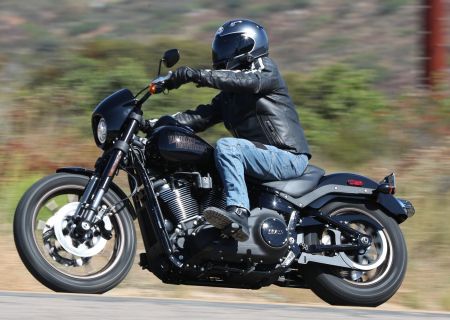 Not seen since the demise of the Dyna line, the Harley-Davidson Low Rider S returns as a Softail with a big-inch Milwaukee-Eight 114 powerplant.

Suspension and braking updates make the 2020 Harley-Davidson Low Rider S the most powerful and aggressive edition of the storied Low Rider since its inception in 1977.

1. The Milwaukee-Eight 114 motor means the 2020 Harley-Davidson Low Rider S packs a powerful, yet controllable, punch. While one might find 119 ft/lbs of torque at 3000 rpm to be unruly, that is not the case with the M8 114. The motor is responsive without being touchy, and it delivers the muscular acceleration you expect. Harley-Davidson put that cupped seat on the Low Rider S for a reason–it helps keep you on the motorcycle when you twist the throttle to the stops.

2. Brakes are hugely important on a motorcycle with serious acceleration, and the Low Rider S’s pair of discs up front deliver. No, they aren’t radially mounted monobloc calipers. Despite that, the pair of 300mm discs get the job done, with the help of the 19-inch Michelin Scorcher 31 front tire and plenty of engine compression braking. It’s a good thing the front discs are strong, as the 292mm rear disc adds almost nothing to the mission of decelerating the 679-pound motorcycle (claimed curb weight). ABS is standard, so feel free to get on the brakes as hard as needed.

3. Chassis performance on the 2020 Harley-Davidson Low Rider S is boosted by a 43mm inverted cartridge fork from Showa. Along with an aluminum triple clamp, the beefy forks give the Low Rider S and a great feel for the road. You can get aggressive in corners without worrying that the front end will wander. Action is plush without being mushy, as the Showa fork has 5.1 inches of travel to work with. The Showa shock moderates 4.4 inches of rear-wheel travel, so the overall ride on the Low Rider S is smooth. Given that you’ll likely be hitting bumps and dips at a higher rate of speed than normal, the premium suspension is an integral part of the sporting personality of the Low Rider S.

4. To encourage you to take cornering seriously, Harley-Davidson tucked the Showa fork in nicely. There is just 28 degrees of rake on the Low Rider S–that’s two degrees less than the standard Low Rider this year, and a staggering four degrees less than the preceding Dyna Low Rider S. These aren’t just idle numbers–the Low Rider S is willing to dive into corners at your behest. Still, it’s not a nervous handling motorcycle due to its 63.6-inch wheelbase. Canyon carving capabilities are enhanced by the Michelin Scorcher 31 mounted on a striking 19-inch Matte Dark Bronze aluminum front wheel, as it delivers more confidence that you might expect.

5. To further incentivize cornering, the 2020 Harley-Davidson Low Rider S has mid-controls. Although it is certainly possible to ride hard into corners with forward controls, mid-controls are unquestionably the preferred foot position for the typical aggressive rider. This gives the Low Rider S 31 degrees of lean angle to work with before anything metal starts to touch down–even then, that means peg feelers that are glad to pivot up for another degree or two. The Michelin tires give full and complete confidence in that 62-degree range, and the generous cornering clearance is rarely exceeded.

6. Although it has mid-controls, the ergonomics are far from strictly sporting. The Motor Company went with what it describes as the “coastal style,” according to Harley-Davidson Vice President of Styling & Design Brad Richards – that is shorthand for narrow handlebars on four-inch risers. Although going that route looks cool, and you can’t underestimate how important that is, it does put the rider in a seating position that is more attitude than aptitude. The riding position is defiantly knees and hands up rather than being primarily suited to sporting riders. Regardless, the Low Rider S is still willing to respond to rider input and go where you want it to go, even if the seating position suggests otherwise.

7. With the expressive ergonomics, you are not likely to empty the five-gallon tank without a stop. Certainly, a motorcycle with a seating position oriented toward conviction rather than comfort doesn’t need a range of 235 miles, yet the Low Rider S has it. The solo seat is good for a fairly long distance, so your arms are likely to complain before your posterior chimes in. Further, the Milwaukee-Eight 114 delivers noticeably more vibration than the standard 107 iteration, though both are counterbalanced. That additional vibration calls for more frequent breaks, especially if you enjoy revving the big twin.

8. Atop the tank is a full-size speedometer and tachometer. They look cool, but are too far out of the field of view to be useful–particularly the tach. Full-face helmet wearers will complain the most, though open-face aficionados will still have to look quite far down to get a rev count. A small digital readout in the dead space behind the mini-fairing would be welcome.

9. Around town, the 2020 Harley-Davidson Low Rider S feels like it is looking for a fight. You put up your dukes, advertise your 114 cubic inches of the Gloss Black Ventilator open air-filter cover, and the 180mm rear tire is wide enough to show you mean business. If you’re in the mood to rev the M8 up, enjoy the sound of the shotgun exhaust, and drop the clutch, you will be rewarded with a spinning rear tire and a black stripe away from the start. We, of course, cannot condone such behavior, but we certainly understand it and undeniably enjoy it when we see, hear, and smell it happening.

10. If you need to hit the highway on the way out of town to your favorite canyon hangout/hideaway, the Low Rider S is a willing accomplice. Despite the fact that your hands are high, they aren’t out wide, picking up too much freeway blast. The front of the Low Rider S is fairly high, and there is a bikini fairing, so wind protection for the rider is significant. The ergos will still discourage long rides, though short high-speed blasts are not unwieldy.

11. The 2020 Harley-Davidson Low Rider S is an unorthodox combination of power, handling, and ergonomics. This is not a motorcycle that will appeal to all riders, by any stretch of the imagination. Instead, the Low Rider S is aimed at a rider who wears a confrontational personality proudly and wants a motorcycle ready and willing to support that belligerence. Without any doubt, the 2020 Harley-Davidson Low Rider S has your back.

With 45 years of riding experience, Don Williams is a fan of all kinds of motorcycles. He enjoys sport bikes, cruisers, dirt bikes, touring bikes, adventure bikes, dual sport bikes, and rideable customs. Ask Don what his favorite bike is and he will tell you, "Whatever bike I'm on."